Alexa is co-author on a paper published in the journal Nature Communications entitled Hippocampal oxytocin receptors are necessary for discrimination of social stimuli with Tara Raam as leading author and Amar Sahay as senior author demonstrating a role for oxytocin receptor-expressing cells in specific subregions of the hippocampus in discrimination of social stimuli and delineating a pathway relaying social memory computations in the anterior hippocampus to the posterior hippocampus to guide social recognition. 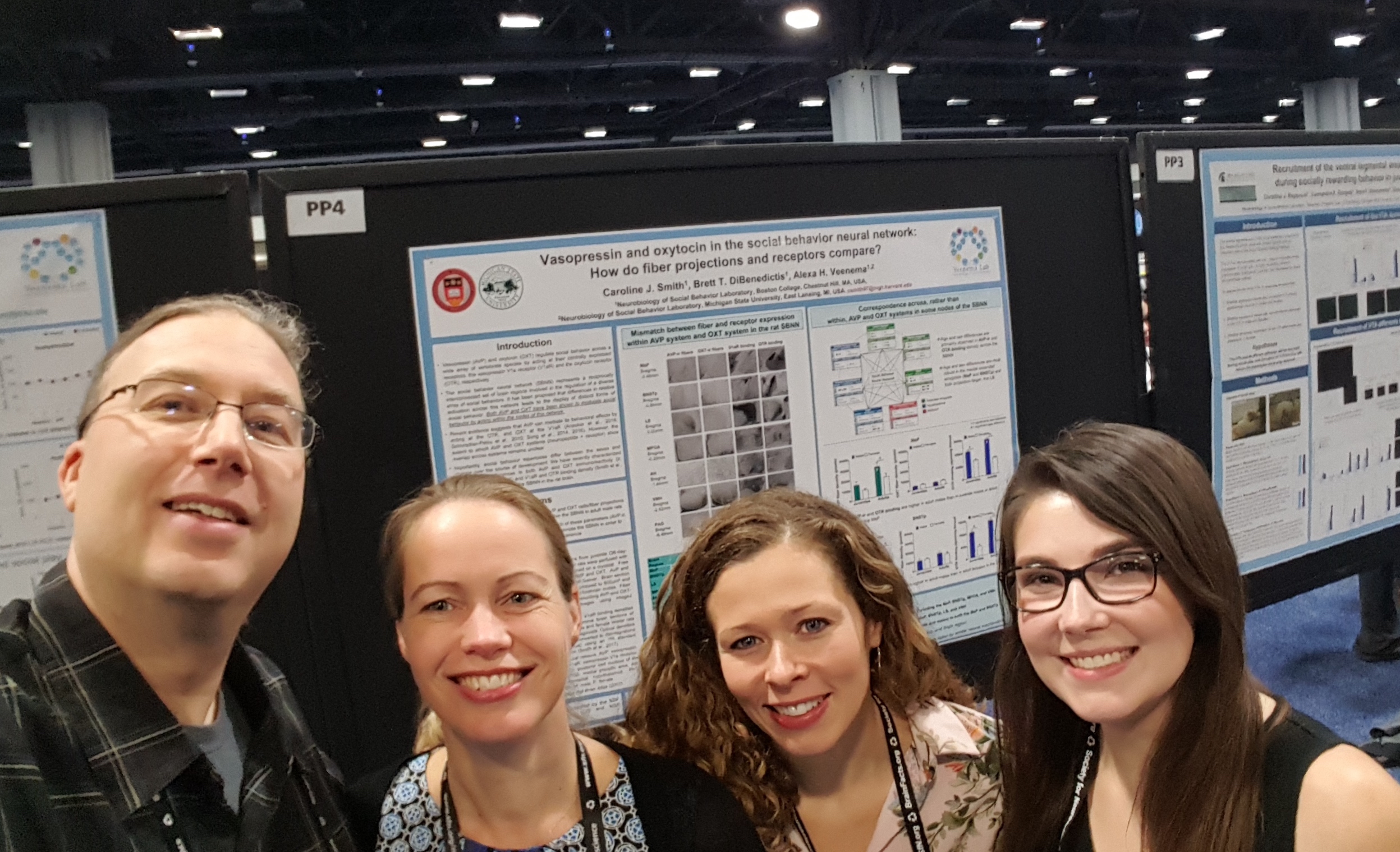 Congrats to Ashley Chambers for being awarded the Provost Undergraduate Research Initiative Award!

Congrats to Christina Reppucci for winning first place in the talk competition at the 2017 Michigan Regional Postdoctoral Symposium!! She talked about the neuroscience of social play and presented her latest findings on the role of the neuropeptide orexin in regulating social play in juvenile male and female rats. 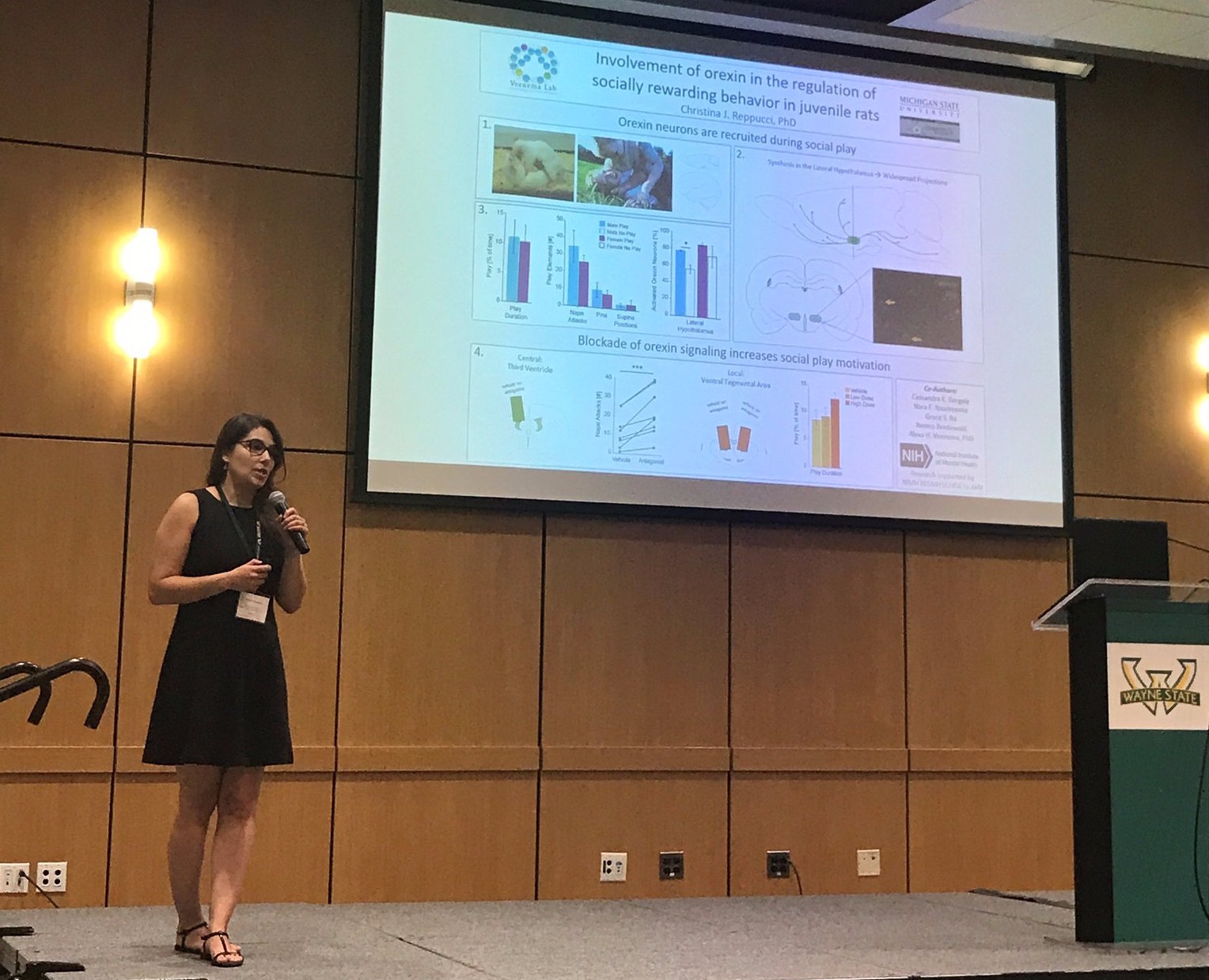 Caroline Smith published a paper in the journal Brain Structure and Function: Robust age, but limited sex, differences in mu-opioid receptors in the rat brain: relevance for reward and drug-seeking behaviors in juveniles. Caroline and co-authors Aarane Ratnaseelan and Alexa Veenema demonstrated that compared to adult rats, juvenile male and female rats showed higher mu-opioid receptor (MOR) binding density in 11 out of 33 brain regions analyzed. These include the lateral septum, bed nucleus of the stria terminalis, hippocampus, and thalamus. Sex differences in MOR binding density were observed in only two brain regions. These findings provide an important foundation for the generation of hypotheses regarding differential functional roles of MOR activation in juveniles versus adults. Specifically, we propose the possibility that higher MOR binding densities in juveniles may allow for higher MOR activation, which could facilitate behaviors that are heightened during the juvenile period, such as reward and drug-seeking behaviors. 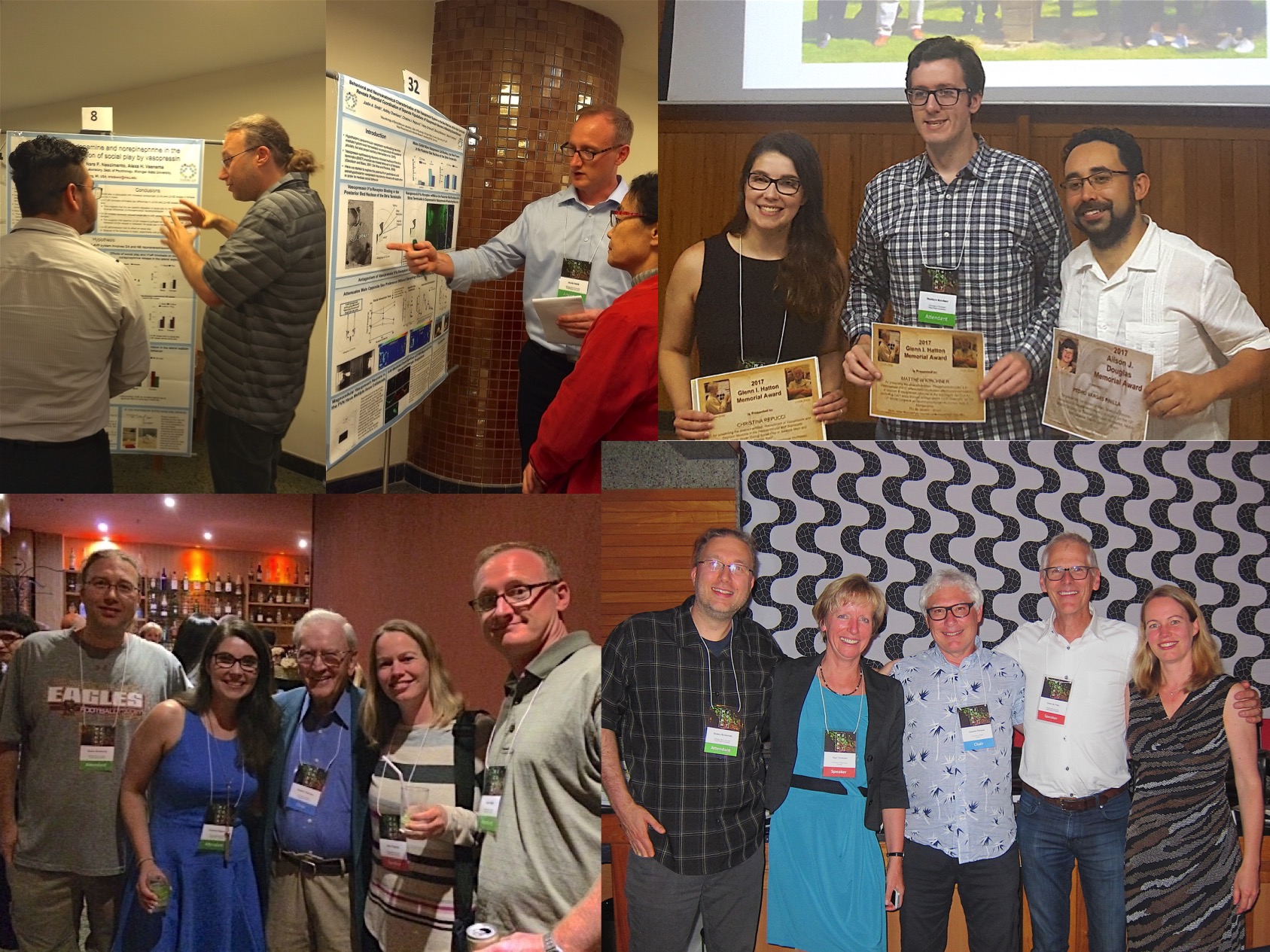 Congrats to Christina Reppucci for receiving the Glenn I. Hatton Memorial Fellowship to participate at the WCNH meeting in Brazil!

Congrats to Justin Smith for receiving the American Physiology Society Travel Award to participate at the WCNH meeting in Brazil!

Remco Bredewold, Christina Reppucci (on photo), Justin Smith and Alexa Veenema participated in the Michigan Chapter of the Society for Neuroscience meeting that was hosted by the University of Michigan. 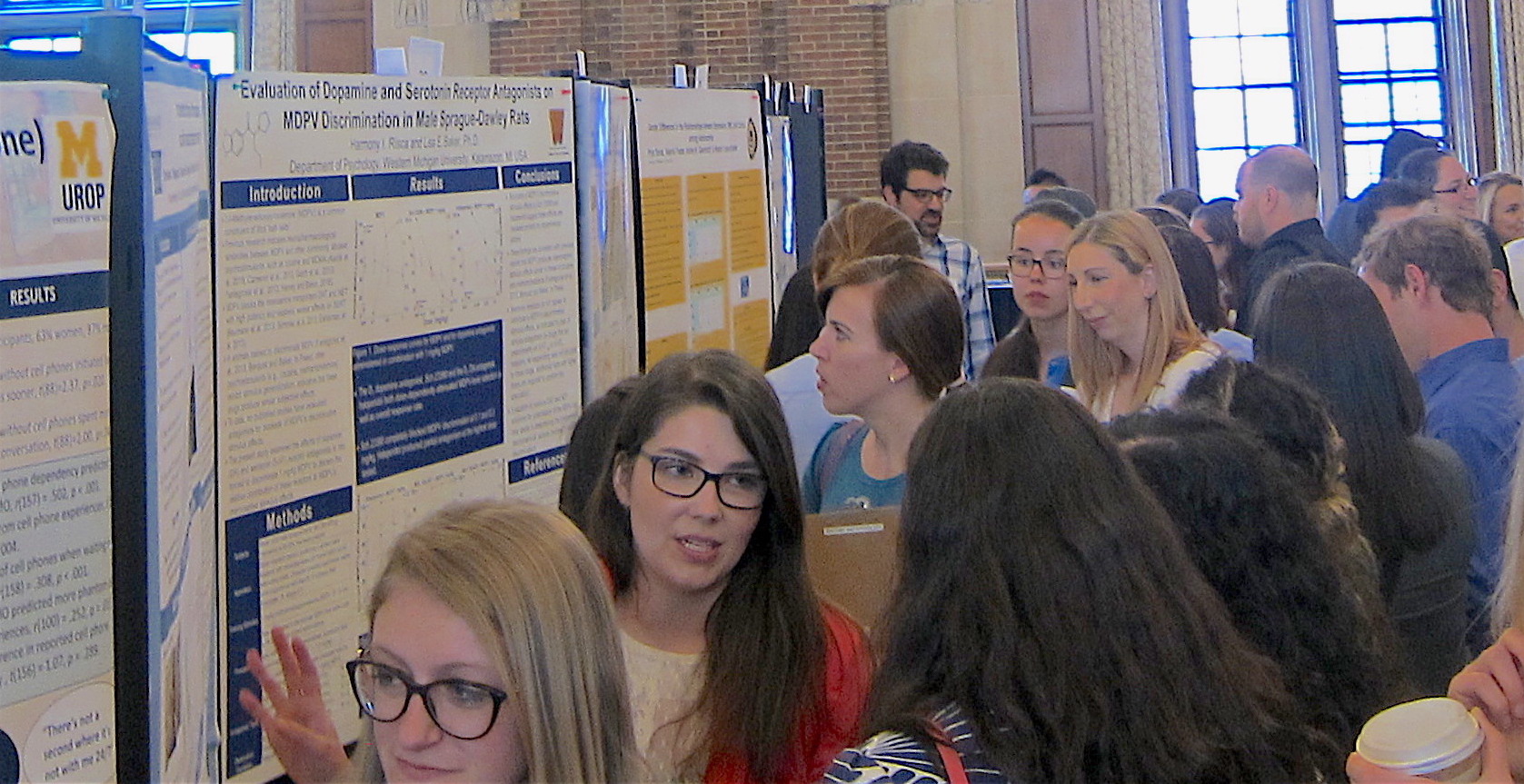 Harry Cheung was awarded Boston College’s Balkema Prize for Best Biology Senior Thesis in 2017!! He was presented with a large plaque for his diploma. Congrats to Harry!! 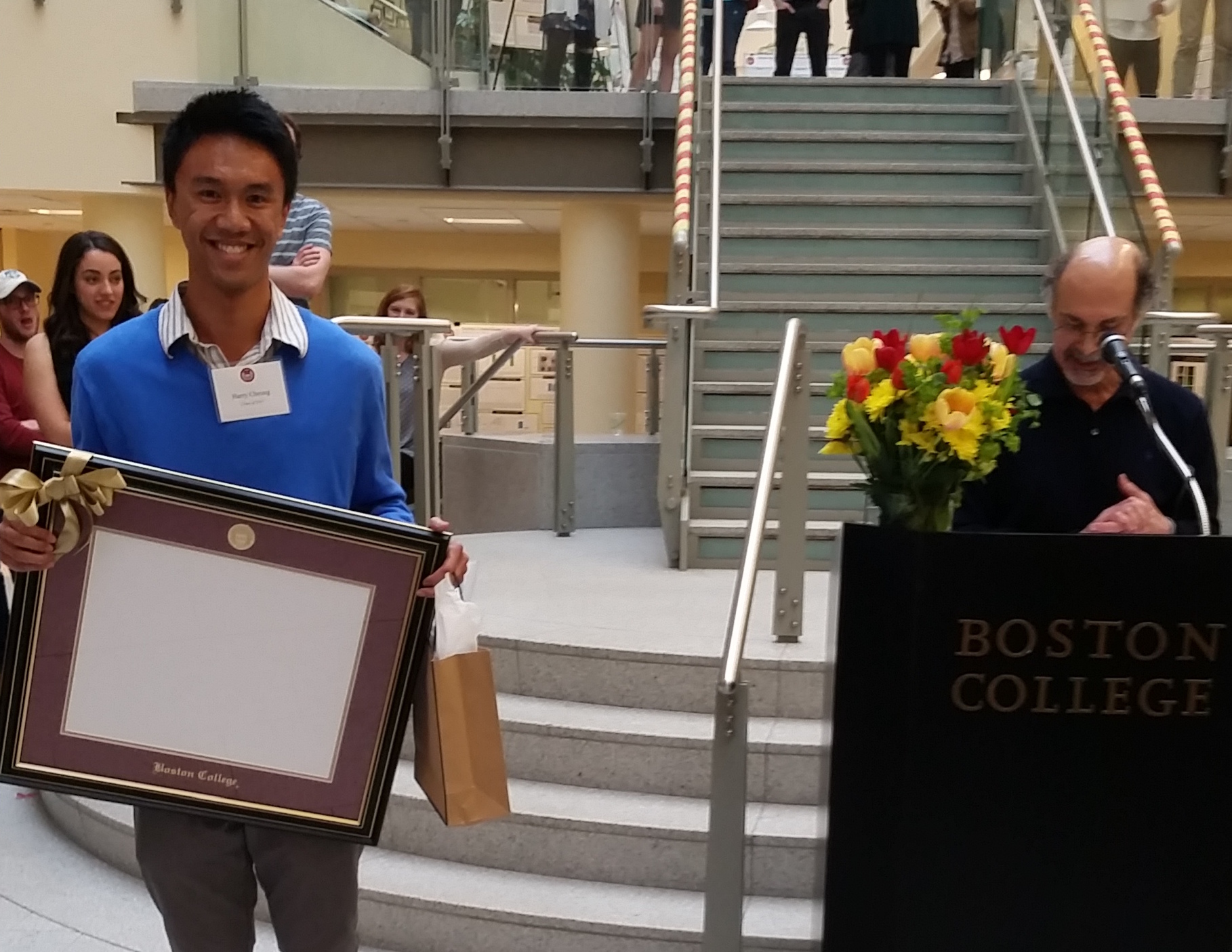 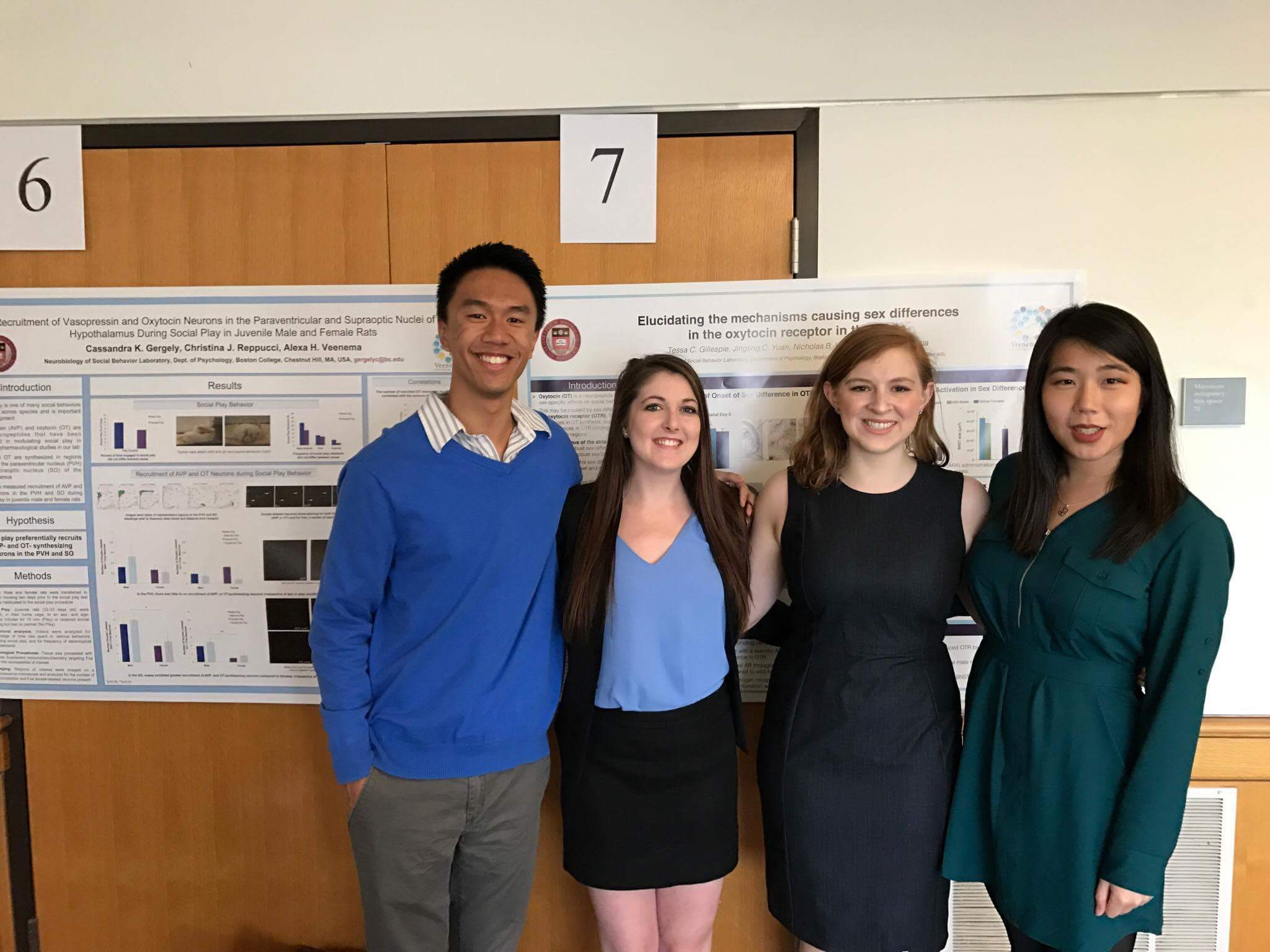 Kelly Dumais published a paper in the journal Psychoneuroendocrinology entitled Sex differences in neural activation following different routes of oxytocin administration in awake adult rats. Kelly and co-authors Praveen Kulkarni, Craig Ferris (both from Northeastern University), and Alexa Veenema demonstrate that adult male rats showed activation in more brain regions than adult female rats in response to oxytocin. This sex difference is independent of route of administration of oxytocin (that is centrally or peripherally). However, central oxytocin administration induced sex differences in activation in more brain regions than peripheral oxytocin. Interestingly, males showed more activation in the nucleus accumbens,while females showed more activation in the amygdala following central oxytocin, findings that are in line with fMRI studies in humans administered intranasal oxytocin. Given the potential of oxytocin to alleviate social dysfunction in a range of sex-biased neuropsychiatric disorders, these findings indicate the need for better understanding of the sex-specific modulation of oxytocin on brain function, in order to determine whether oxytocin can be used to treat social dysfunction in men and women alike. 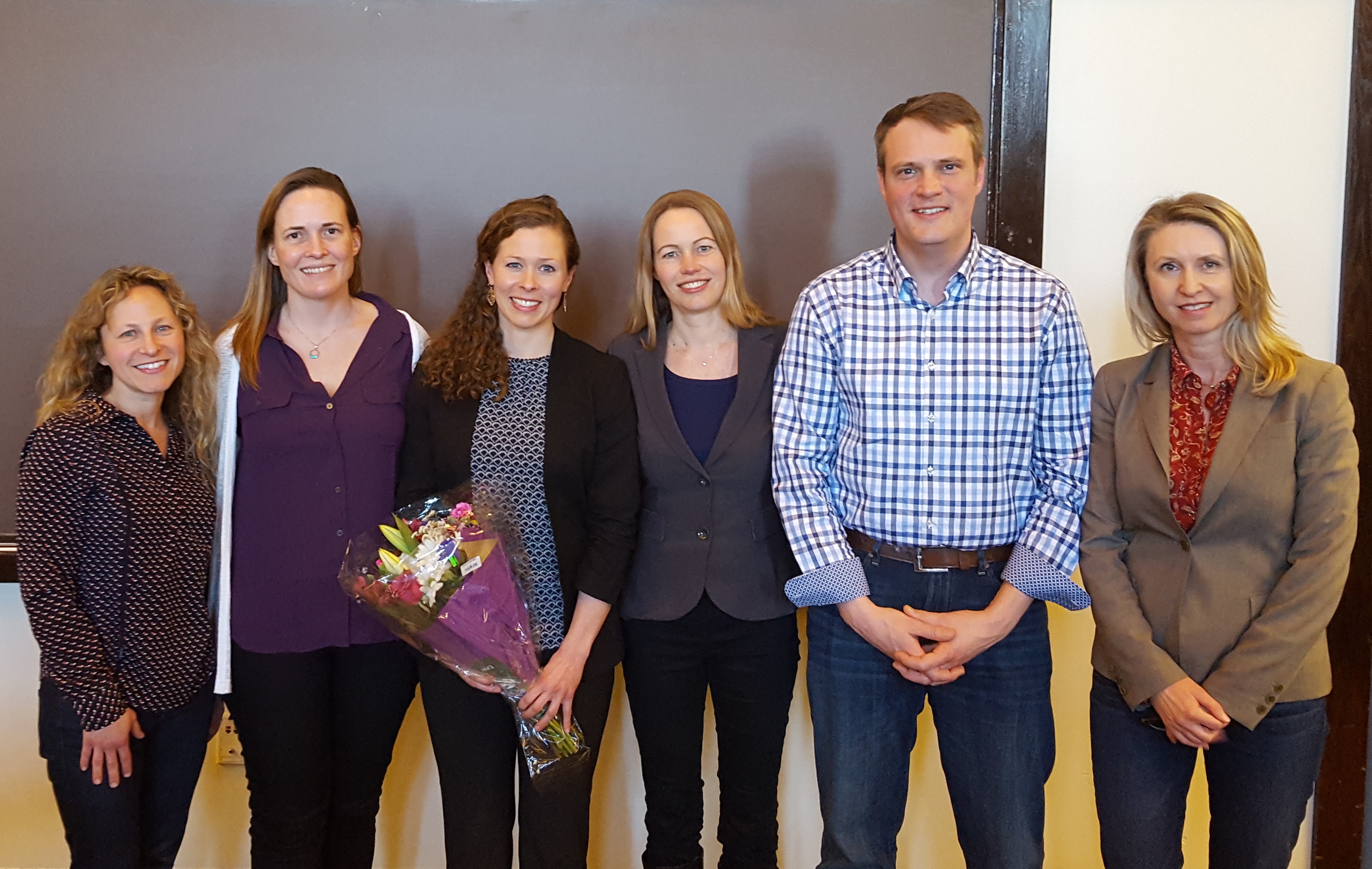 Brett DiBenedictis published a paper in the Journal of Comparative Neurology entitled Quantitative Mapping reveals age and sex differences in vasopressin, but not oxytocin, immunoreactivity in the rat social behavior neural network. Brett and co-authors Elizabeth Nussbaum, Harry Cheung, and Alexa Veenema found numerous age (16 subregions) and sex (10 subregions) differences in density of vasopressin axonal projections and in the number of vasopressin cells, which were mainly observed in the medial amygdala/bed nucleus of the stria terminalis to lateral septum circuit. In contrast to vasopressin, no age or sex differences in oxytocin axonal projections or oxytocin cell bodies in any of the 22 subregions of the forebrain social behavior neural network were observed. Thus, unlike the static pattern observed for oxytocin, vasopressin innervation of the forebrain social behavior neural network appears to undergo developmental changes, and is highly sexually dimorphic. This provides an important framework to test hypotheses with regards to the functional consequences of these age and sex differences in AVP for the regulation of social behavior.

Kelly and Alexa’s review paper in the Journal of Neuroendocrinology entitled Vasopressin and oxytocin receptor systems in the brain: Sex differences and sex-specific regulation of social behavior has been cited 31 times by Google Scholar within 1 year after online publication!