Kelly published a paper in the journal Psychoneuroendocrinology entitled Involvement of the oxytocin system in the bed nucleus of the stria terminalis in the sex-specific regulation of social recognition. Kelly, Remco, Alexa and undergrads Andrea Alonso (’15) and Marisa Immormino (’15) examined, for the first time, the link between oxytocin receptor expression and oxytocin release in a single brain region and revealing higher oxytocin receptor binding and higher oxytocin release during social recognition in male rats compared to female rats. These findings emphasize the importance of studying both sexes in order to fully understand how the oxytocin system modulates social behavior.

Congratulations to Kelly for winning second place (out of 128 poster presenters) in the S4SN 2015 Annual Meeting Peoples Choice Poster Award! 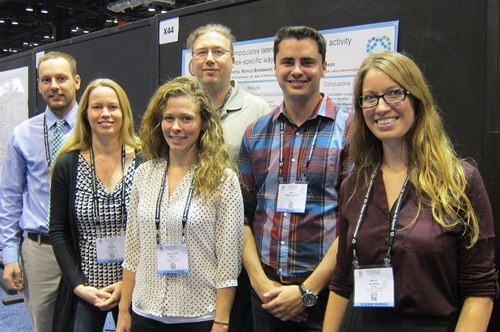 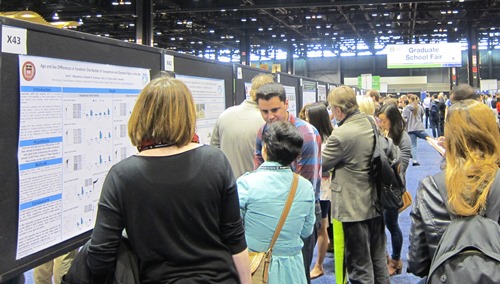 The SfN conference in Chicago brought together a community of 29,033 attendees from 78 countries, who interacted with 517 exhibiting companies, viewed 13,788 posters, and attended 839 sessions. 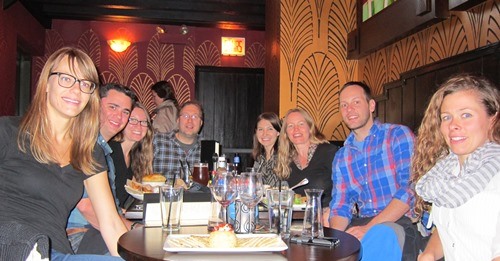 Kelly and Alexa published a book chapter in Sex Differences in the Central Nervous System entitled “Presence and Absence of Sex Differences in Structure and Function of the Brain Oxytocin System: Implications for Understanding the Regulation of Social Behavior“. This book provides a comprehensive examination of the current state of sex differences research, from both basic science and clinical

research perspectives. In our chapter we discuss the evidence showing sex differences, or lack thereof, in structure and function of oxytocin (OT) and the OT receptor in rodents and humans. We find that (i) the reported sex differences in the brain OT system are not ubiquitous, but appear to be highly species-specific and (ii) actions of the OT system on behavior and neuronal responses are often sex-specific, but do not necessarily correspond with sex differences in OT system parameters. Based on these findings, we propose that sex differences in the brain OT system depend on species-specific social organizations (i.e., mating, parental, and sociality systems) and discuss sex-specific actions of OT on behavior and neuronal responses in the context of differences in social organizations. Furthermore, OT may show promise in the treatment of social dysfunction in neuropsychiatric disorders, many of which show sex differences in prevalence and treatment responses. We therefore discuss recent advances and precautions of OT as a therapeutic agent in the treatment of social dysfunction in both men and women. Overall, we find that there is limited research investigating the effects of OT on behavior and brain responses in males and females in the same design, highlighting the need for comparative research, particularly if OT is to be used as a therapeutic agent in both sexes. Given the many studies indicating a role of the brain OT system in sex-specific regulation of social behavior, an important next step will be to investigate how these effects are mediated and how they relate to the presence or absence of sex differences in brain OT system parameters.

Kelly, Caroline, Sara, Grace, Harry, and Nick presented their work during the poster session at the 15th Symposium of the Center for Neuroendocrine Studies, UMass Amherst. 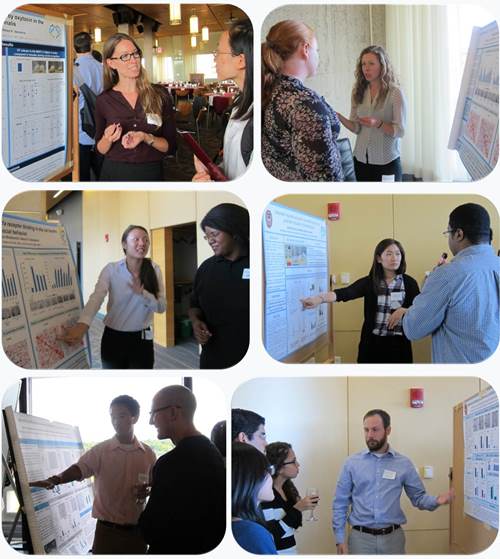 Kelly and Alexa are co-authors on a paper published in the journal Frontiers in Behavioral Neuroscience entitled Distinct BOLD activation profiles following central and peripheral oxytocin administration in awake rats. Using functional neuroimaging in awake adult male rats, leading author Craig Ferris, Kelly, Alexa, and other colleagues demonstrate that oxytocin induces distinct neuronal activation patterns depending on the route of administration, i.e., directly injected into the brain or injected in the periphery. This strongly suggests that peripheral oxytocin does not have direct access to the brain. This information is relevant given the current interest in using oxytocin to change brain activation which may help to alleviate social deficits in patients suffering from social disorders.

Caroline published a paper in the Journal of Neuroendocrinology entitled Social novelty investigation in the juvenile rat: modulation by the mu-opioid system. Caroline and co-authors Kevin Wilkins, Jazmin Mogavero and Alexa Veenema show that social novelty-seeking in juvenile rats is facilitated by the opioid system in the brain, while dopamine, oxytocin, or vasopressin systems do not seem to be involved in mediating this behavior. This finding is relevant because impaired social novelty-seeking is characteristic for autistic children which may hamper their development of social skills. The next step will be to localize the effects of the opioid system to specific brain regions and neural circuits.

Alexa gave a talk, and Brett, Caroline, Kelly, Nick, and Remco presented posters on their work at the Annual Meeting of the Society for Behavioral Neuroendocrinology which took place in Pacific Grove, California. 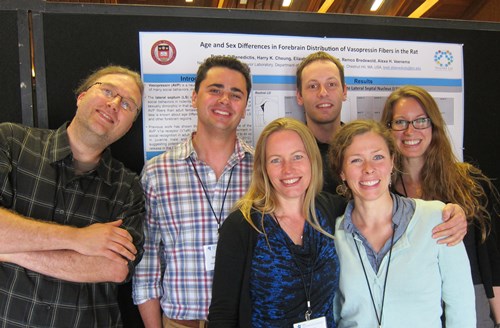 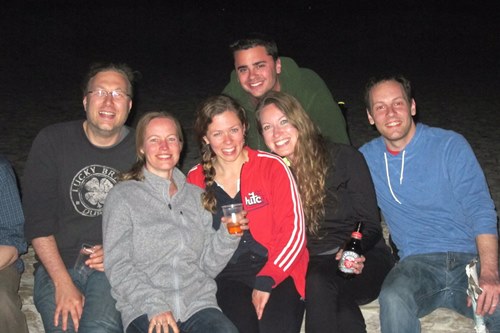 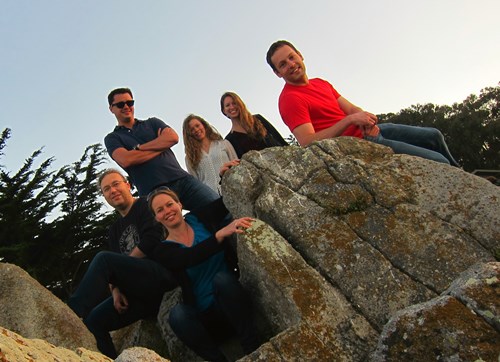 Kelly, Caroline, and Nick gave talks about their research at the annual Graduate Research Day of the Department of Psychology at BC. 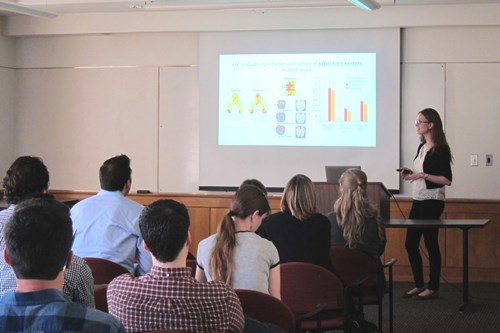 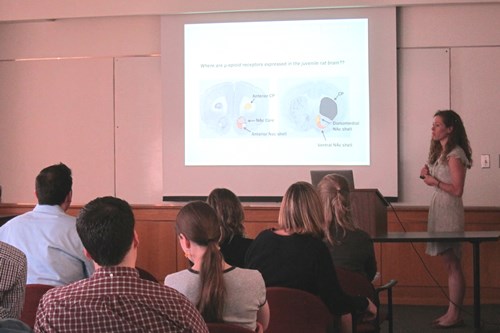 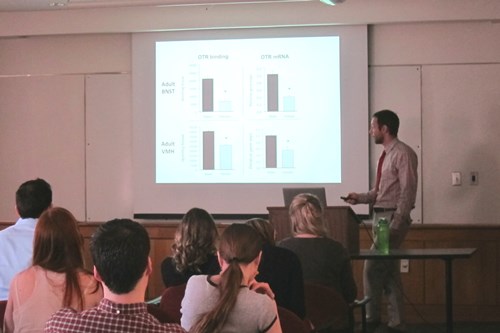 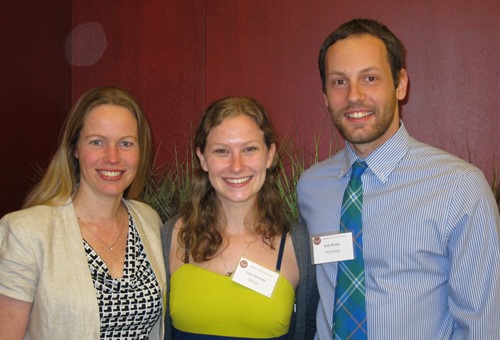 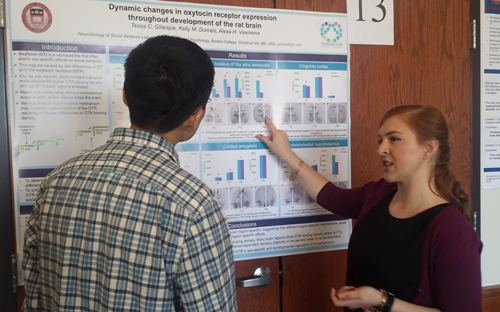 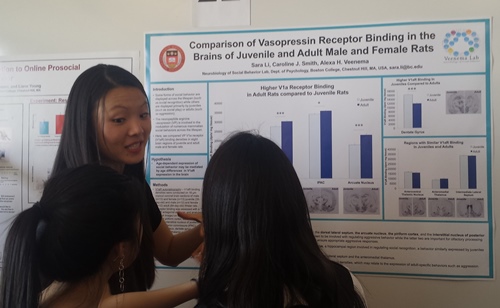 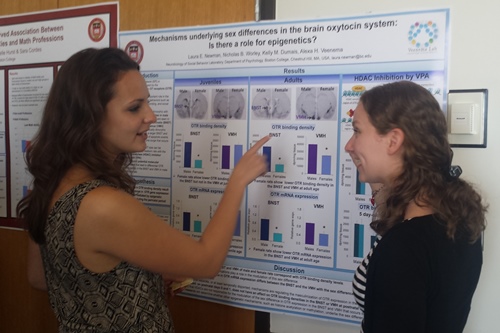 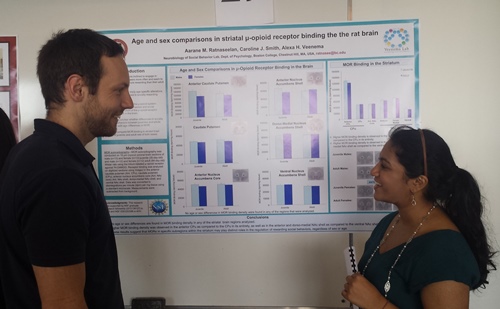 Citations to Alexa’s publications reached 2500 on Google Scholar, which is 500 more than last year!

Grace was awarded an Advanced Study Grant from BC to support her thesis research over the summer. Congrats Grace!

Kelly was awarded a Dissertation Fellowship from the Graduate School of Arts & Sciences at BC. Congrats Kelly!

Alexa gave a talk in a Symposium on “Comparative Aspects of Play in Humans and Rodents” at the Annual Meeting of the Eastern Psychological Association, which took place from March 5-7 in Philadelphia.

Alexa gave a talk at the Winter Conference on Brain Research in a panel on “Vasopressin/Oxytocin and the Development of Mammalian Social Behavior”, organized by Elliott Albers (Georgia State University, second from left), with also as speakers Matt Paul (University at Buffalo; second from right) and Liz Hammock (Florida State University; far right). This conference took place in Big Sky, Montana, the biggest skiing in the USA. Go to Happenings for ski-photos. 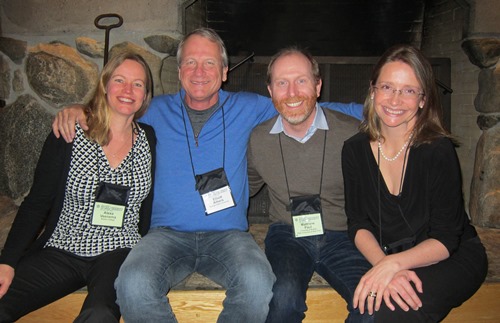