Caroline Smith, Kelly Dumais, and Remco Bredewold presented posters at the annual meeting of the Society for Neuroscience which took place in San Diego, CA. Fourth photo depicts sunset over the convention center. 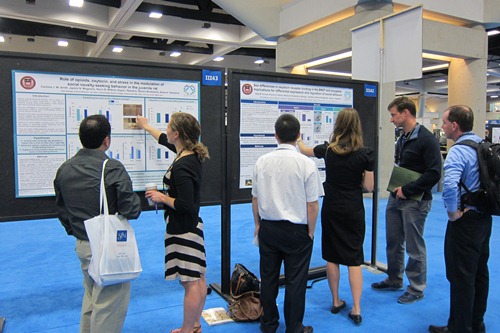 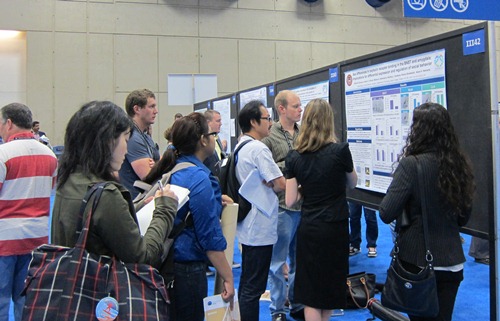 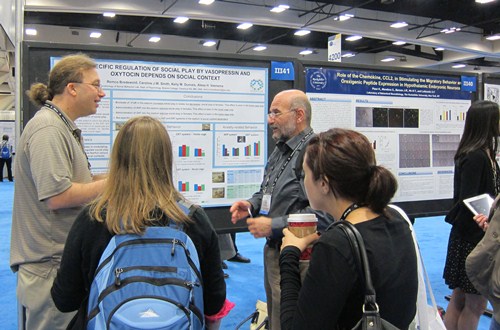 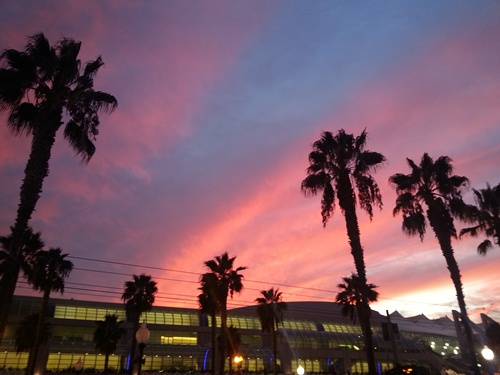 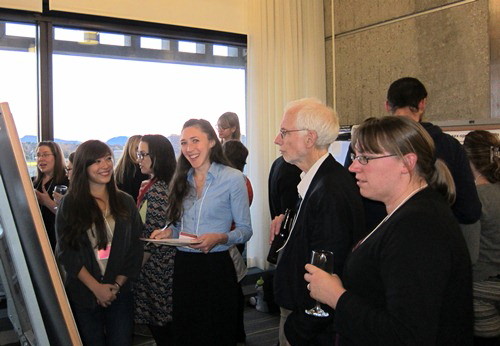 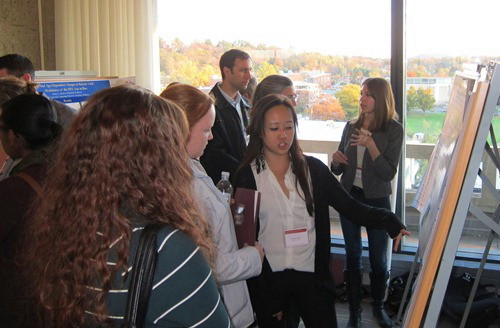 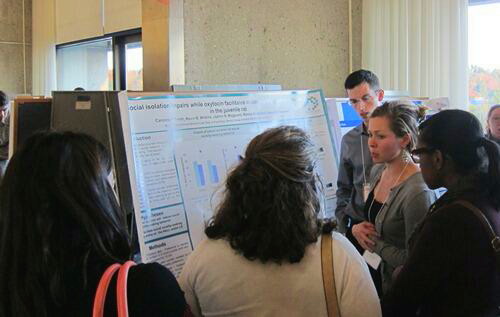 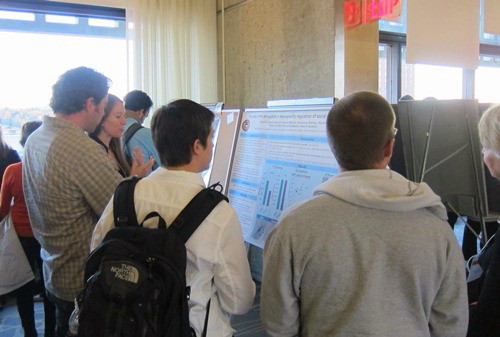 Kelly Dumais got her first first-author paper entitled “Sex differences in oxytocin receptor binding in forebrain regions: Correlations with social interest in brain region- and sex-specific ways” published in the journal Hormones and Behavior!! She and co-authors Remco Bredewold, Thomas Mayer (class ’12), and Alexa Veenema found that female rats have significantly less oxytocin receptor binding densities than male rats in the majority of forebrain regions analyzed. This is an important finding because oxytocin is still considered as being more important for females than for males. Our findings suggest that this may not be the case. Furthermore, Kelly found that female rats spent much less time investigating novel rats than male rats do, suggesting that females show lower social interest than males. This low social interest in females correlated negatively with oxytocin receptor binding density in the central amygdala, an area involved in anxiety-related behaviors. In contrast, high social interest in males correlated positively with oxytocin receptor binding in the medial amygdala, an area involved in social behavior. These sex-specific correlations may be implicated in a neural circuitry regulating low (females) versus high (males) social interest. Kelly is currently testing this hypothesis. This research was supported by institutional funding provided by Boston College. 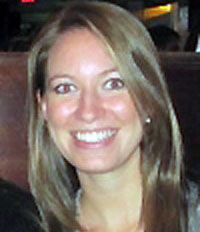 Kelly Dumais received a highly competitive Ruth L. Kirschstein National Research Service Award (NRSA). Kelly’s research focuses on the neurobiological basis of sex-specific regulation of social behavior. This 2-year award allows her to employ a unique combination of techniques (including in vivo microdialysis and fMRI) to examine the role of oxytocin and its underlying neural circuits in mediating social interest in a rat model. Congrats Kelly!!

Alexa Veenema received the NSF Faculty Early Career Development (CAREER) Program award!! This award is given to promising young faculty members who exemplify the role of teacher-scholar through outstanding research, excellent education and the integration of both education and research. This award will support research over a five-year period in which Alexa aims to advance the understanding of the sex-specific neurobiological regulation of social behaviors in the juvenile period. Alexa’s award is highlighted in BC Chronicle.

Alexa gave a talk about the ongoing research in the lab at the Summer Science Institute for High School/Middle School Science teachers which is run through The Education Cooperative. This week long summer program (July 11-15) aims to inform Science teachers about the latest developments in various fields of science.

Caroline successfully defended her Master of Science Thesis on July 1st. On the photo, Caroline and the Promotion Committee consisting of Profs. Gorica Petrovich, Sara Cordes, and Alexa Veenema. 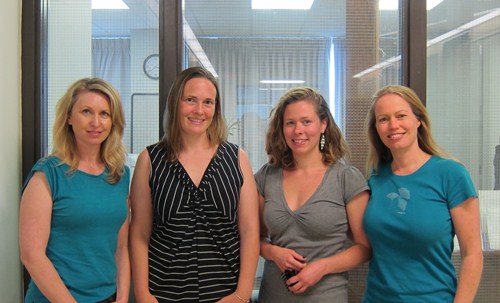 Kelly Dumais, Caroline Smith, and Remco Bredewold presented posters on their research projects (see photos below), and Alexa Veenema gave a talk (title: key roles for vasopressin and oxytocin in sex-specific regulation of juvenile social behaviors) at the annual meeting of the Society for Behavioral Neuroendocrinology, which took place in Atlanta on June 23-26. 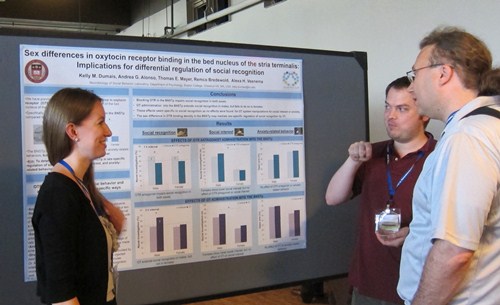 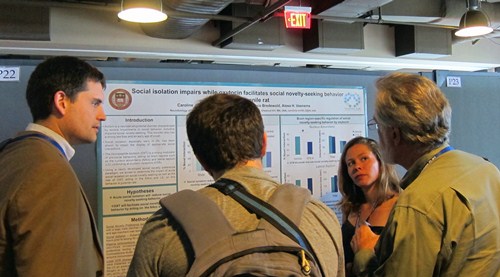 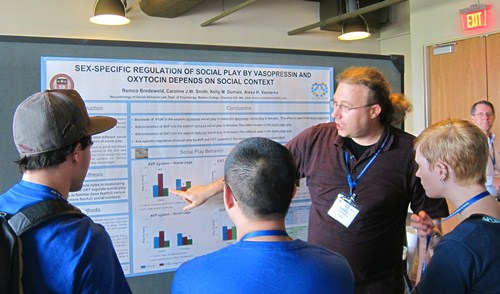 Andrea Alonso, Marisa Immormino, Sterling Karalula, Jennifer Schiavo, Kevin Wilkins, and Christine Wu received competitive BC Undergraduate Research Fellowships, which will allow them to do full-time research over the summer in preparation for their senior research thesis.

Alexa Veenema gave a talk at a symposium on “Oxytocin and Emotional Dysregulation: Translating Basic Research Into Clinical Science” as part of the annual meeting of the Society of Biological Psychiatry which will take place on May 16-18 in San Francisco. 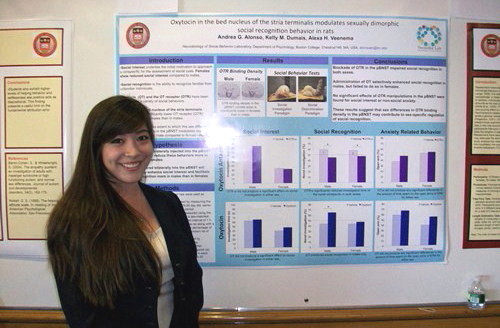 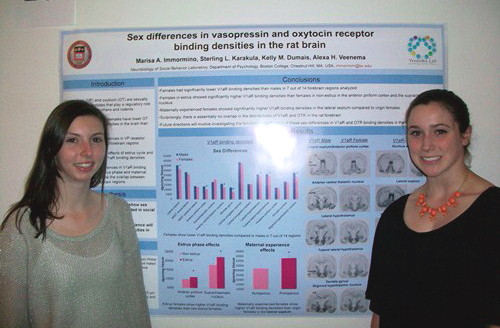 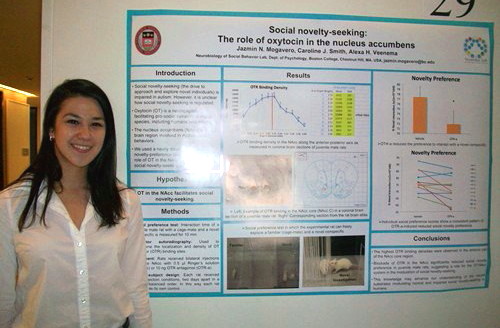 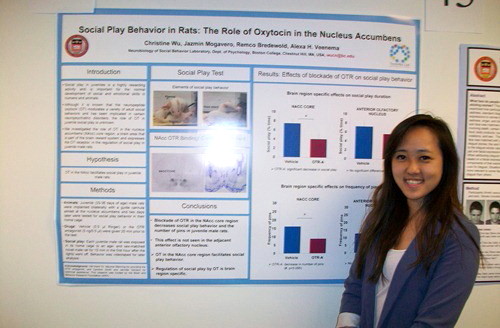 Alexa Veenema gave a talk at a symposium on “The Social Brain in a Dynamic Social Environment” that is organized in honor of the retirement of Prof. Jaap Koolhaas, PhD advisor of Alexa Veenema, which takes place on March 22, in Groningen, the Netherlands.

Alexa participated at Boston College’s Women in Science and Technology Program. This program brings high school girls to campus to expose them to scientific research.

Alexa Veenema will gave a talk at the 2013 Social Neuroendocrinology Pre-conference on January 17, in New Orleans.